Inesa is 76 years of age and in need of partial dentures. She was recently referred to DVI’s Smiles for Seniors program for evaluation. This is a new program that provides free dentures to needy elderly and Holocaust survivors. It was determined that Inesa has several teeth that will require some dental care prior to being fitted for her removable partial dentures. She will soon be smiling BIG!

Inesa is just one of many poor elderly patients receiving this care at DVI thanks to the generosity of supporters like you. Please join our Virtual Holiday Party. Stay Home And Save A Smile with your gift. 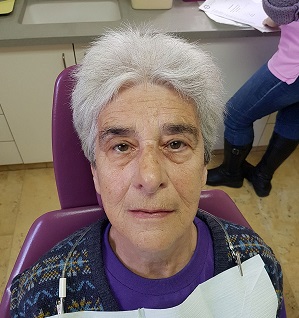 Inesa was born in Leningrad and ultimately trapped there when fascism took over and the city was sealed off from the outside world. Under the loving eye of her mother and grandparents, she managed to survive her childhood with the most meager of food rations, minimal heat and extremely difficult conditions. She never knew the joy of being “daddy’s little girl” as her father was killed when she was just three months old.