Chava is a Holocaust survivor who came to DVI with dentures that were 22 years old. They were crumbling and she knew they needed to be replaced, but she could not find a way to afford new ones. So, she continued to suffer with ever deteriorating dentures. Thankfully, Chava and DVI found each other and were the perfect match. Now she feels like a new person and is very grateful for her new dentures. “I am blessed with many family celebrations and was worried about how I would look with missing teeth,” she told us. Now, she’s happy to show her new smile! 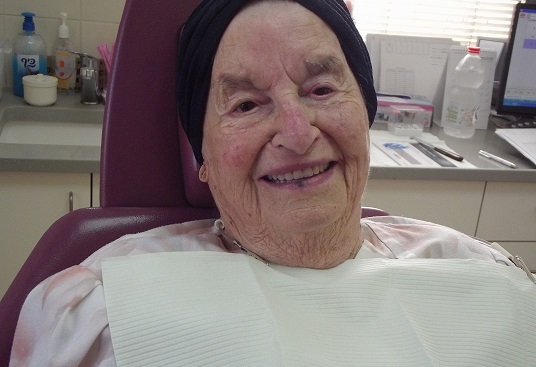 Chava was born in Hungary in 1924. Before the Germans invaded she had been engaged but, as the situation worsened, they were unsure whether or not to proceed with the wedding. The family tried to determine if her chances of survival were better as a married woman or as a single girl. The Germans were taking single girls before married women, so Chava married in the ghetto. Ten days later her husband was taken by the Nazis.

In the 1940 roundup of men only, Chava’s brother was taken and put to work for the war effort. It was later learned from a survivor who was with him in 1943, that he was one of the many who had contracted typhus and died.

In 1944 Chava, her parents, and her three sisters were sent to Auschwitz. There, Chava’s mother was sent one way while her four girls were sent another. A few days later Chava and hundreds more girls and women were selected for factory work. They were asked if they wanted to forgo this position and Chava raised her hand but was not allowed to stay. Ultimately, being sent to the factory saved her life. For the following weeks she agonized over how to get word back to her family to volunteer for this type of selection so that they too could be saved. Such thoughts tormented her, but ultimately this was impossible. Out of the 74 individuals in the cattle car to Auschwitz, Chava was one of only three who survived the war and the only survivor in her family.

In March 1945, the Russians arrived. The girls were being paid and were expected to work hard to rebuild Europe. One early morning, Chava and some others left camp to return to Hungary in search of remnants of their families. They reached Pressburg for Shabbat after a two day trek.  The Joint Distribution Committee took care of them there. That was where she met a cousin who informed her that her husband had also survived. He and Chava were reunited and finally left Hungary in 1949. Chava has been blessed with six children and today she is a proud mother, grandmother, great-grandmother and great-great grandmother!