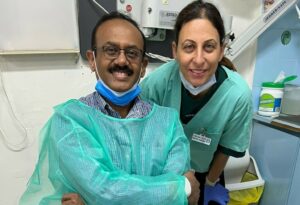 As the Russian invasion of Ukraine shook the world, Davis Thomas, clinical assistant professor in the Department of Diagnostic Sciences, followed the news from a distance. But during his volunteer trip to Israel last month, he witnessed the conflict’s impact first-hand when treating a 14-year-old Ukrainian refugee.

“I don’t think I know any teenager who has been so traumatized by something beyond our control,” said Thomas, who attained a masters in Dentistry from RSDM in 2010. “It really was a life-altering experience because you worry about every little thing, [but] … the family, the town, the life in Kyiv she knew–everything is just a mirage now.”

Thomas volunteered at the Jerusalem-based Dental Volunteers for Israel (DVI), the only free dental clinic in Israel. During his six days there, he treated patients from Jerusalem, West Bank, and Ukraine. Though this was his second time at DVI, Thomas volunteered at every opportunity throughout his career, including in his native India and Peru.

“I always loved volunteering,” he said and added that helping others is part of his culture. “Any time I get an opportunity, I will do it. … It’s very fulfilling.”

At DVI, he observed his 14-year-old patient was not only in dental pain but also in psychological pain from escaping war and living in an orphanage. “I just wanted to connect to her first before trying to treat her,” he said. He initially didn’t know how, but the right question suddenly came to mind: “what do you want to be when you become big?” After a pause, his patient answered him through an interpreter: an international translator.

“I think this is because she’s been through all these camps,” Thomas thought and started the treatment as he gained her trust.

This relationship caught the eye of another refugee, a 13-year-old girl, who felt unready for treatment. Noticing her distraught, Thomas invited her to observe the process.

“The kids from the Zhitomir Chabad Orphanage in Ukraine still imagine they hear booming in the night,” explained Michelle Levine, director of international relations and development at DVI, and a Rutgers alumna. She added that many DVI patients experienced extreme trauma and are sometimes unable to get X-rays or receive treatment.

“Davis’s caring and personal approach made his patients feel comfortable to sit still enough to be treated,” Levine said. “Several patients opened up to him, telling their dreams for the future. Davis’s magnetism and humor won over the whole clinic.”

At the end of his service, DVI invited Thomas to revisit.

“That’s the biggest applause I can get,” Thomas said. Next month, he’s going to Chennai, India, to volunteer at a local orphanage, and then he will be back in Israel next year.

“It’s the greatest thing one can do, especially for underprivileged kids anywhere in the world,” he said. “I wish more dentists came to know about this and donated their time.”