Lev arrived at the DVI clinic with a mouth full of problems and unable to eat almost anything. After extracting his tooth, Dr. Palmon, the director of DVI’s Smiles for Seniors program, went to work preparing a set of upper and lower dentures for Lev. He is now a new person in many ways – his speech is clear, his nutritional intake is healthier, and he is enjoying all the favorite foods he was unable to eat for a long time!

YOU CAN MAKE A DIFFERENCE IN THE LIFE OF A SENIOR 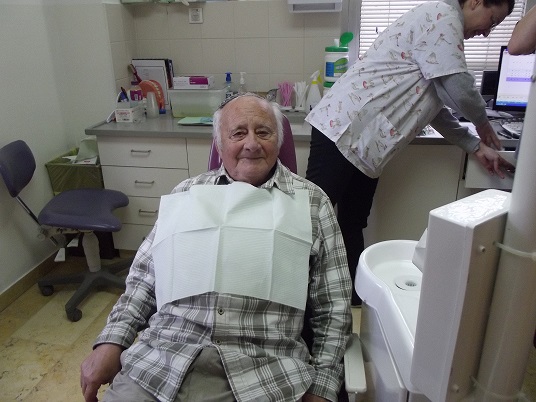 Lev Rezansky was born in 1930 in a small Jewish town in the Ukraine called Lochvitza. He was the oldest of three children living in a multi-generational family setting with his parents and grandmother.

In 1940, at the age of 10, he literally “ran for his life.” His youngest sister was only a year old when they fled. Lev’s father remained behind, attempting to protect the town, but he too was ultimately forced to flee. Fortunately for the family, even though they left independently and at different times, during their escape they managed to meet up and be reunited. Those Jews who remained in Lochvitza were massacred – all 287 of them.

For the remained of the war, the Rezansky family stayed in Kazistan where life was very difficult. Lev’s father was drafted into the Russian army, leaving his wife to fend for the family and somehow keep the children alive, which she did!

After the war, Lev’s younger brother went to Israel while his sister remained in Russia. In 2011, Lev went to Israel with one of his daughters, leaving his other daughter in Moscow.

Thanks to the Rezansky family and two of their surviving friends, a memorial was erected in their home town listing the names of the 287 Jews viciously murdered there.