Nedal Alayyan first arrived at DVI in 1984, at the age of seven. Like many of DVI’s patients, young Nedal was in pain with a puffy, swollen face by the time Jerusalem’s Welfare Department sent him to our clinic. He’d been missing classes due to dental problems. Volunteer dentists treated Nedal and he left the clinic in relief. “Even as a child, I realized that kids who suffered from dental pain were in a worse situation – in school and overall. When DVI staff asked me if I had brothers or sisters who needed treatment, I realized they weren’t out to finish my charity treatment and get rid of me, but truly wanted to reach out and help everyone they could.” Nedal was so positively impacted by DVI that he became a dentist!

VOLUNTEER OR MAKE A GIFT TODAY! 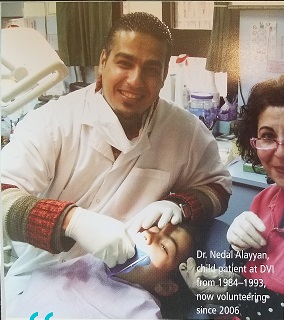 From that day on, Nedal and his siblings returned to DVI every six months. During those years, Nedal discovered a passion for dentistry and faith that the profession was one dedicated to helping people, even people in need with no ability to pay. In his own words, “Many people think solely about their work, their personal lives, money issues, their kids. At DVI, I witnessed selflessness – regular people worrying about the well-being of others.”

Nedal credits his experience at DVI for providing his inspiration to become a dentist.

“From my first day at the clinic, DVI dentists were so kind to me, so concerned with me personally, inquiring about me, rewarding me with a gift they’d brought from abroad to Israel…I hadn’t expected this type of treatment at that point in my life – from anyone. From that moment, I knew I wanted to be a dentist – especially to treat children with kindness and compassion, because children really need that extra level of care. Today, I treat many patients with Down Syndrome who are rejected by other clinics – having learned from DVI dentists how patience, kindness and a gentle touch makes a profound difference.”

Today, Nedal lives in East Jerusalem with his wife and daughter. In 2003, he established his own practice and a few years later, in 2006, Dr. Alayyan joined DVI’s local team of volunteer dentists, filling in when foreign dentists cancel. Dr. Alayyan truly enjoys his volunteer time with DVI and his warm charm has won the affection of many visiting dentists as well as DVI’s entire staff, but he is rather humble about it, “Not every dentist gives out his trade secrets. But at DVI, we’re all one big international family. I learn to be a better dentist from so many dentists from around the world – it’s an experience I wouldn’t trade for anything. I want to give something back to DVI, but I end up still on the receiving end!”

In June 2009, Dr. Alayyan proudly joined DVI’s staff in receiving the President’s Award for Volunteerism from President Shimon Peres. In 2010, Dr. Alayyan visited New York City to celebrate DVI’s 30th Anniversary. During the Gala marking this important milestone, he was awarded the Distinguished Volunteer Award. You can watch an introduction by Dr. Gordon Christensen and then Dr. Alayyan’s remarks here.