Veronica had a set of dentures that were accidently thrown out. She was left unable to chew solid foods and suffering greatly because of it. The good news is that she found DVI and is in the process of receiving a full upper denture and a partial lower denture. Thanks to DVI’s new Smiles for Seniors program, which provides free dentures to Jerusalem’s needy elderly and Holocaust survivors, a sweet smile is already returning to her face! 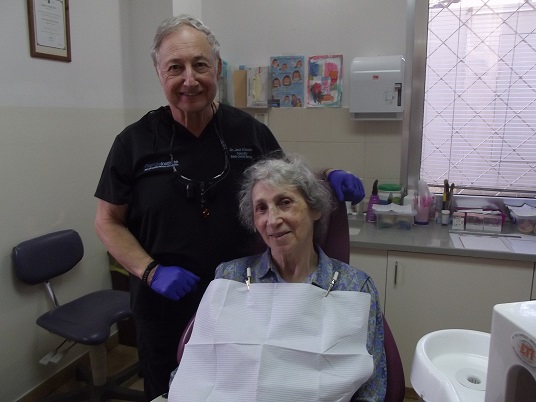 Veronica is pictured with Dr. Jack Klausner of Florida.

Veronica was born in Estonia in 1935, a region that was captured by the Russians in 1940. Once the Russians invaded it was impossible to leave, however her father managed to get a permit for his wife and three daughters to escape. He packed a few things for them including one silk nightgown and multiple sets of linen which proved to be a lifesaver for them. Her mother traded the linens for food and sold the silk nightgown for a large sum of money as a local farmer thought of it as an evening gown. Some fancy head-coverings they took along were ultimately used to weave scarves for the local farmers. These items enabled Veronica, her mother, and her sisters to acquire food; saving them from starvation.

The family returned to Estonia in 1944 to discover that although the Russians had left, other locals had occupied their home causing them to once again flee with nothing but the clothes on their backs. Although originally financially well-off, the bulk of Veronica’s life was one of struggle and hardship.

In 1992 Veronica finally made it to Israel with her husband and daughter. She worked in the kitchen of a nursing home until she was no longer strong enough to do so. Veronica, now a widow, lives with her daughter. She does not have the means to pay for new dentures and is happy to have found such a wonderful place as DVI.