Eliyahu is one of DVI’s needy elderly patients. His dentures were over a decade old and cutting into his gums. They were becoming more and more unstable in his mouth and he was in pain. He was finding it difficult to do the things we take for granted, like eating and speaking. Eliyahu came to DVI not knowing exactly what to expect. Today he is all smiles and full of compliments. To quote Eliyahu, “This is the first time ever the dentist got it right on the first try! I came in, measurements were taken, dentures were fitted and when I came back I got my dentures and they have been comfortable from the beginning!” 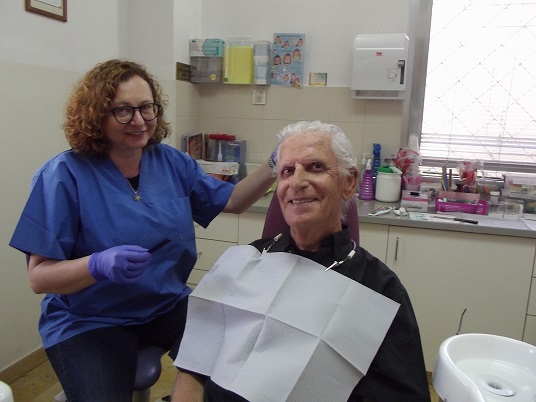 Eliyahu is an 83-year-old Jerusalem resident who spent 64 years of his life working as a printer. He was born in Morocco and at the age of twelve immigrated with his family, including his grandparents, to Israel; a dangerous and difficult thing to do at the time. The family travelled by train from Morocco to Algiers where they met up with representatives from the Jewish agency for Israel. With the assistance of this representative they made their way to France and from there on an Arabic boat to Israel.

Eliyahu married and had two sons and a daughter. One of his sons was killed in combat while serving in the IDF and his other son is about to get married. His daughter has given him four grandchildren and they in turn have blessed him with five great-grandchildren. He smiles when speaking about the blessing of getting married at a young age and living to be a part of three generations of descendants. Eliyahu has seen Jerusalem grow and expand and is proud of his city. He remembers when the current site of the DVI clinic was a vacant sandy hill!

Eliyahu is thankful for all he has, including his new dentures! He received the treatment he desperately needed thanks to wonderful supporters like you. Together we can help more of Jerusalem’s poor elderly and Holocaust survivors smile again!