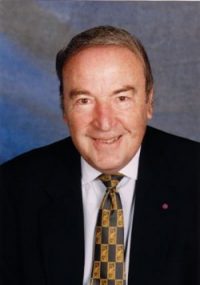 Dr. D. Walter Cohen, a native son of Philadelphia, was a second-generation dentist.  His father, Abe, was the first practicing periodontist in the city. Dr. Cohen attended the University of Pennsylvania undergraduate school and earned his D.D.S. from the School of Dental Medicine. After completing research fellowships in pathology and periodontics in Boston, Dr. Cohen established the Department of Periodontics at the University of Pennsylvania and served as its first chairman. He was named Dean of the School of Dental Medicine in 1972 and served in that capacity until 1983. During his tenure as Dean he was responsible for introducing new courses, recruiting new faculty, and establishing a residency program for dental students.

Dr. Cohen wrote 22 books and published more than 130 articles. After leaving the University of Pennsylvania he became the President of the Medical College of Pennsylvania in 1986 and opened a new educational campus. His many accomplishments included a Gold Medal from the American Academy of Periodontology, an honorary membership in the British Society of Periodontology, and the Legion of Merit Award from the French government.

DVI’s founder Trudi Birger befriended Dr. Cohen and he was actively involved in the establishment of the DVI Clinic. He was also involved with the clinic’s efforts to treat those in need and served as the Honorary Chairman of American Friends of DVI until his passing in June 2018. It was our privilege to know and work with Dr. Cohen and we are extremely grateful for the support he provided to American Friends of DVI and the DVI clinic for so many years.

With great respect and admiration, we are posthumously honoring him at the DVI 40th Anniversary Gala on November 28, 2021. He was a true champion for DVI and vital to its success. As we gather to celebrate DVI’s important milestone we celebrate friends like Dr. Cohen.  Dr. Mark S. Wolff, Dean, University of Pennsylvania School of Dental Medicine will make remarks honoring Dr. Cohen at the Gala.