Chaim Rudich is a Holocaust survivor who was praying for one more miracle.  His 20-year-old dentures no longer fit properly.  They kept moving and caused difficulty when eating and speaking.  Chaim was told he needed to replace his old dentures.  Given the tens of thousands of shekels it would cost to do so, he thought he was sentenced to a life of pain and suffering.  This is where DVI’s supporters were able to make Chaim’s miracle happen.  Thanks to generous donations, Chaim is now in the process of receiving new full dentures through DVI’s Smiles for Seniors program!  The new program has been providing free dentures to Jerusalem’s needy elderly and Holocaust survivors since September 2016.  Help us help more seniors in need this holiday season. 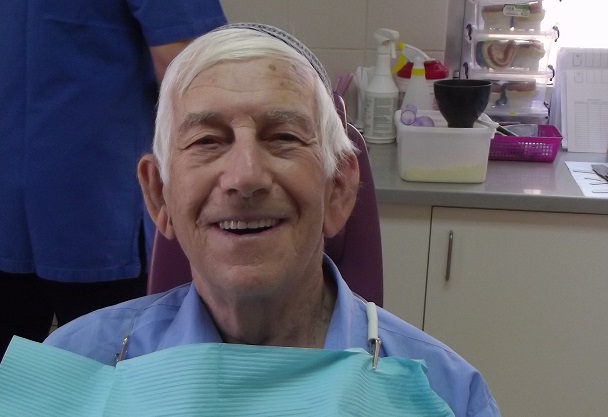 Chaim, an only son to the Rudich family, was born in Chernovitz, which in 1941 began deporting its Jews to Germany. Attempting to avoid deportation, the family set off for the Ukraine. After a few stops on the train the family was forced to disembark and all of their valuables were confiscated. They trekked the remaining hundreds of kilometers to Moldavia in sub-zero December temperatures with just the clothing on their backs. The Rudich family, and many other Jews, slept in barns during this arduous journey.

Upon their arrival, they moved into the ghetto where a religious carpenter took pity on the young boy and set up the family in his workshop where he had a small burner which he allowed them to use for minimal warmth. They lived there for the following three and a half years! The family was able to survive because Moshe and his father worked in the ghetto bakery and the women of the 11-member family wove shawls and sweaters.

The Russian partisans under the command of a Jewish officer liberated this ghetto. Russian practice was to automatically send all men to the front to fight the Nazis, but upon learning that the Rudiches were themselves survivors, they only took the father to work on behalf of the war effort.

Chaim, his mother and his aunts returned to their birthplace which was now under Russian control. When his father was allowed a week’s vacation, he rejoined the family and they all fled to Romania. Chaim was 15 at the time. Chaim studied hard and was accepted into the Romania high school. Shortly thereafter, a Zionist youth movement sprung up, and Chaim was part of the 16,000 children on the first transport out of Romania. He traveled through Bulgaria to Turkey and sailed for Palestine. The British intercepted their boat and as part of a deal made with the Jewish agency, he was sent to Cypress. Five months later, at the age of 17, he was given permission to come to Israel. His parents joined him two years later.

Chaim served in the Golani brigade on the Syrian border. After being discharged he continued to work for the IDF for the following 43 years in gardening and mechanics at the Tel Hashomer base. He is a proud father and grandfather today!