Moshe came to DVI, as many senior patients do, because his dentures were causing him pain and he was having difficulty chewing. The dentures had deteriorated over time and were causing painful sores in his mouth each time he put them in or took them out. We’re happy that Moshe has found a place to heal in DVI. We know that he looks forward to getting new dentures that will allow him to eat and speak pain free! 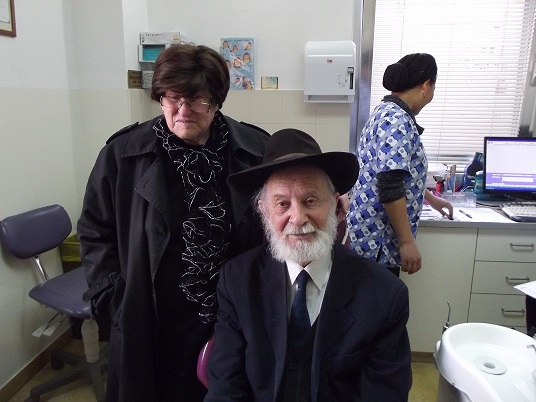 Moshe was born in 1931 in a town in Czechoslovakia that during World War II was either under Czech rule or considered part of the Ukraine. One dark night the family was forced out of their home and into a ghetto in Beligzas where they lived for thirteen and a half months before being deported to Auschwitz.

Upon their arrival in Auschwitz, like all others, the men and women of the family were separated. Moshe was separated from his twin sister during their eight long months there, but he still says that each day was filled with miracles.

The rest of the family had been killed, so when the Russian army freed them a woman took the twins into her own home. There they learned that anyone wishing to go to Palestine had to get to Romania, which Moshe did. He spent a year there and eventually arrived in Israel in 1946. His sister followed in 1950.

When Moshe arrived in Israel, he went directly to yeshiva in the Sanhedria area of Jerusalem. Eventually, he worked as a bookbinder and later he worked with diamonds for twenty-nine years. He learned each trade on the job and in the process raised a family of four children. For the last twelve years before he retired, Moshe worked as a kosher supervisor in the King David Hotel.