At the age of 22, A has been a patient of DVI for 9 years. As he explained, coming to DVI at the age of 13 was the first time he had ever had a real dental check-up! That was the beginning of his oral health education. He takes pride in caring for his teeth and has religiously returned for check-ups and hygienist treatments, and in general assumed a serious role in his oral health! Young adults like A can continue to receive free dental care at DVI until the age 26, but we need your support to make that care available. 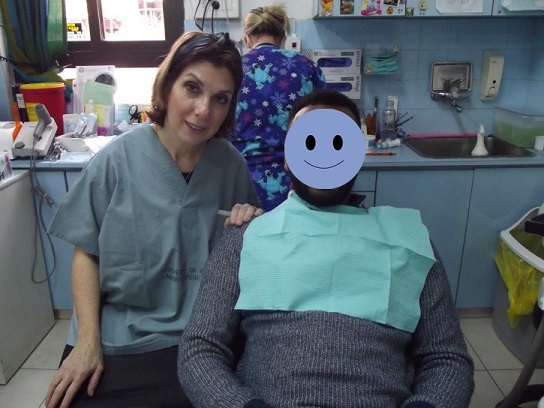 A is pictured with Dr. Sandra Molinas of New York.

A was born in a small village in Ethiopia. As a young child, a family member developed an illness which required the family to sell everything they owned so they could move closer to a hospital in a larger city. Near the hospital, the Jewish Agency had set up a transit camp, processing Jewish Ethiopians for their journey to Israel. A describes this entire experience as “a complete miracle” because while living in their small village they knew nothing about being able to go to Israel! After proving their Jewishness to the agency, the family came to Israel in 2001 in Operation Wings of the Dove. A was six years old.

Upon arriving in Israel, the family was settled in Nahariya. Like many Ethiopians, the family’s dream was to live in Jerusalem, the heart of Zion. That dream was realized!

A, like most other Israelis, served in the IDF for three years. He did his army service in a unit that works with computers; one of his passions. Now that he has been discharged, he hopes to pursue a career in computers but for now is working with children in his local community center, teaching them about computers and 3D imaging. He also spends a lot of time volunteering in his community both with Ethiopians and native Israelis. Giving back is a strong value that has been ingrained in him by his mother, a childcare worker, and his father, a bus driver.

A is an extremely gracious young man with a strong appreciation for all that he has. He described the DVI volunteer dentists as “incredibly kind and thoughtful” in addition to being “extremely professional.