N is a 24-year-old young man and one of ten children whose parents immigrated to Israel from Ethiopia over 35 years ago. He did his army service with the Kfir brigade. As a soldier on active duty, he was stationed in a variety of locations including Hebron, Gaza and Jenin. It was during this time that N went through some experiences that inspired him to become more observant. After being released from active combat, he moved to Jerusalem to deepen his Jewish knowledge and to build his future. 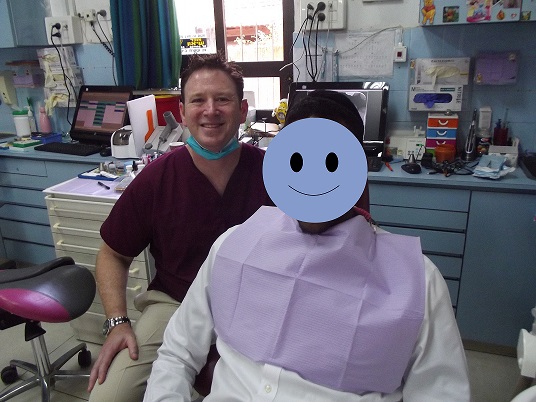 N is pictured with Dr. Brad Klassman who volunteered at DVI for the first time in 2018.

Today he studies in a yeshiva in the mornings and at Ono College in the afternoons where he is pursuing a degree in business. To support himself, he works part-time in the evenings as an armed security guard. This is a young man who is going places!

Right now, N is in need of our free dental services. He has already benefited from the skills of a volunteer periodontist for a much-needed extraction. He has also received general dental treatment and oral hygiene care. Young people like N need us. Please give today!